What Lies Beneath Norfork Lake?

What Lies Beneath Norfork Lake? 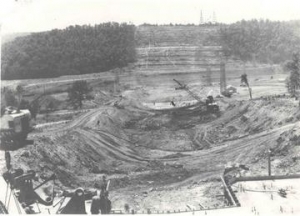 Blasting work and construction on the dam began in the spring of 1941. About 4,000 people turned out for the spectacle of the first blast.

There’s very few people around who could honestly say they used to live at the bottom of a lake.

The eerie sound of the water and bubbles swishing past old forgotten buildings, and catfish and bass making their homes amongst once occupied grave sites in flooded cemeteries and in the rafters and foundations of decaying schoolhouses. These are the buildings and ruins of what is left of the towns under the water of what is now Norfork Lake.

The towns were once known as part of Henderson and Elizabeth, Custer, Hand, Jordan and Herron. Of course, these forgotten towns weren’t always underneath the water of the Norfork River that ran next to them. 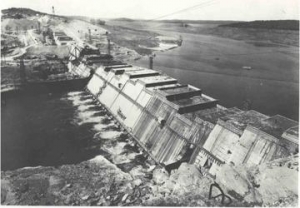 Construction of the dam took about three years. At the time of completion, the Norfork Dam was one of the six largest concrete dams in the country. Two companies hired to do the contracting work were also hired to work on the Grand Coulee Dam and Hoover Dam.

According to Baxter County and Mountain Home documents, during the Depression Era, the town of Mountain Home was struggling, and many farmers were leaving their lands around the area for better jobs up north. For many of us, it’s hard to imagine this now bustling town as being in a dire situation with hardly any businesses to attract customers and only one or two paved roads. However, in the 1930s, the town and the area was just trying to make ends meet.

The residents knew something had to be done. It was decided a dam had to be built, not only to control flood waters that threatened farming property, but also to bring in jobs. The Norfork Dam was to be one of eight dams in the White River basin.

Two companies were awarded construction contracts: the Morrison-Knudsen Company and the Utah Construction Company. These two companies already had a prestigious reputation from building the Grand Coulee Dam and Hoover Dam. At the time it was completed, 1944, Norfork Dam was one of the six biggest concrete dams in the country. The dam, plus the hydroelectric powerhouse, cost about $28.5 million. 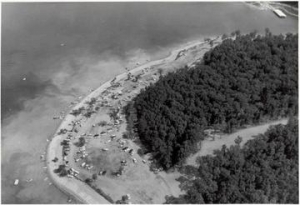 This aerial photo of the lake taken right after the reservoir was filled shows small bits of debris from the towns that once occupied the area.

On a spring day in 1941, about 4,000 people showed up at the building site to witness the first blast into the earthen hillside for the dam. This blast was a herald of doom for the towns that lay below the dam site in the reservoir.

As anyone can imagine, not all people were happy about the construction, especially those whose homes were going to be flooded when the dam was completed. About 400 people had to leave their homes. If a land owner had buildings on his land, the government would pay for their land, but if there were no structures on the property, then the land owner would lose everything that was covered by water.

Reble Comstock, 90, of Viola, was once a resident of one of the towns that is now partially covered by Norfork Lake. Comstock used to live in Elizabeth near Big Creek. She said, though her father’s farm wasn’t affected much by the rising lake water, many of her neighbor’s farms were. “The worst thing was that we lost our neighbors,” Comstock said. “They couldn’t go out and do anything, so they had to move.”

“The dam was the biggest change in my life.”

Comstock remembers what the towns were like before the dam was built. She said there was a church in Hand that is now covered by water around Hand Cove Resort in what is now Hand Cove. The Hand Cove area that straddles the Fulton-Baxter County line is named after the town that was covered by the water when the dam went in.

“In Herron (and Henderson), there was a schoolhouse that was also a church,” Comstock said. “It’s now under water.”

Not only did the living have to be relocated, but the dead had to be moved as well. Cemeteries in the towns of Custer and Herron had to be moved to higher ground. The cemetery is now known as the Custer-Herron Cemetery on Highway 62-412 just beyond the Fulton-Baxter County line.

According to the Scuba Doo Dive Shop in Mountain Home, which does some diving to the bottom of Norfork Lake, there is very little left of the towns except foundations and an old bridge. “It’s a great dive down to the bridge,” Elizabeth Kenyon of Scuba Doo Dive Shop said. She said there are still some rafters of the bridge left and there is an old motorcycle sitting on top of it.

Though the dam brought jobs and prosperity to Mountain Home, smaller towns were destroyed and forgotten. Comstock, however, has a positive view. “What helps one, hurts the other,” Comstock said. “But, I guess that’s a good thing.” 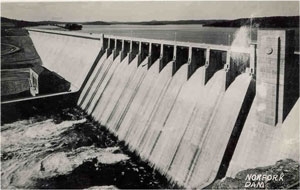 Fun Historical Before & After Photos 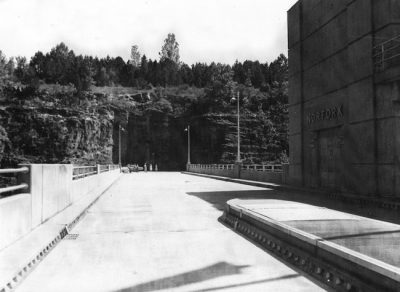 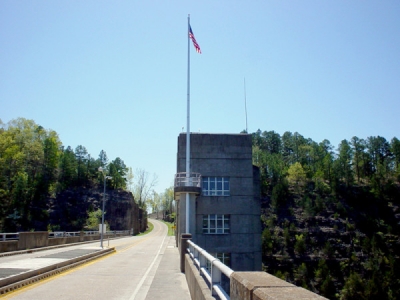 Norfork Dam prior to the bluff being removed to allow Hwy 5 across the dam’s top; circa late 1950s.
After image is Norfork Dam in 2005. 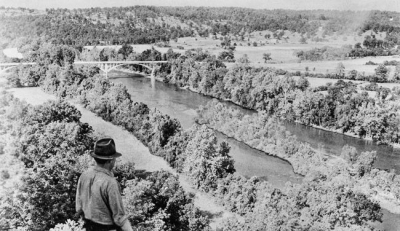 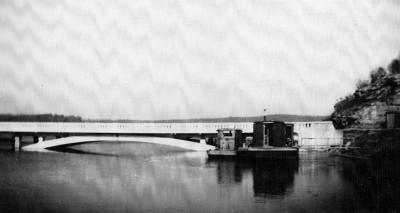 A view of Hwy 62 over the North Fork of the White River, before the formation of Norfork Lake.
Then, in 1944, the bridge and farmland at Henderson were inundated as Norfork Lake fills.